Egg Turning During Incubation – a review by Mohamed Mostafa El-Ashram

Four independent factors combine to play a major part in the incubation process for optimal chick quality and quantity.

These factors are temperature, humidity, ventilation, and the turning of hatching eggs. Incubator manufactories have designed their machines to best utilise these four factors to provide the most stable environment to surround the embryos within egg mass for the entire incubation period. Only the perfect harmony of the temperature, humidification, ventilation and turning systems can control the gasseous exchange and heat/cool transfer necessary for maximun environmental stability and provides the macro and micro-environment to satisfy the ever changing needs of the developing embryos.

In one field experience a hatchery reported a poor performances of hatchability traits and chick quality. The first thought of hatchery team was that their ventilation system was at fault. The results were, high late mortality and malposition rates up to 10 % with the resultant hatchability dropping to 15 % less than normal. After a thorough investigation it was found that although their egg turning system appeared to be working, according to their computer monitoring system, in reality it was discovered that their turning system was only working in two positions, one side and level. It was a turning problem and with regular checks the loss of chick quality and quantity could have been saved.

This article aims to review the scientific background behind the importance of turning eggs through days 0 to 18/19 of the incubation period. Moreover, I will review the facts about the impact of programmed turning angles and frequencies on hatchability traits.

The objective of both incubator manufacturers and hatcheries “ the end-user” is to provide the correct turning angle and turning frequency for the best quantity and chick condition.

Typically, commercial hatcheries turn eggs once toward each side of the incubator every hour. It is important to ensure a consistent 43° to 45° turning angle at all times on both sides. Research has showed that egg turning is critical in the first week of incubation, especially first 3 days. It has also shown that after 15 days turning it is not necessary and stopping will not affect hatchability. There are strong opinions that to stop turning at this age allows a better airflow within the cabinet and provides a more efficient cooling of eggs in the latter exothermic stages of incubation. 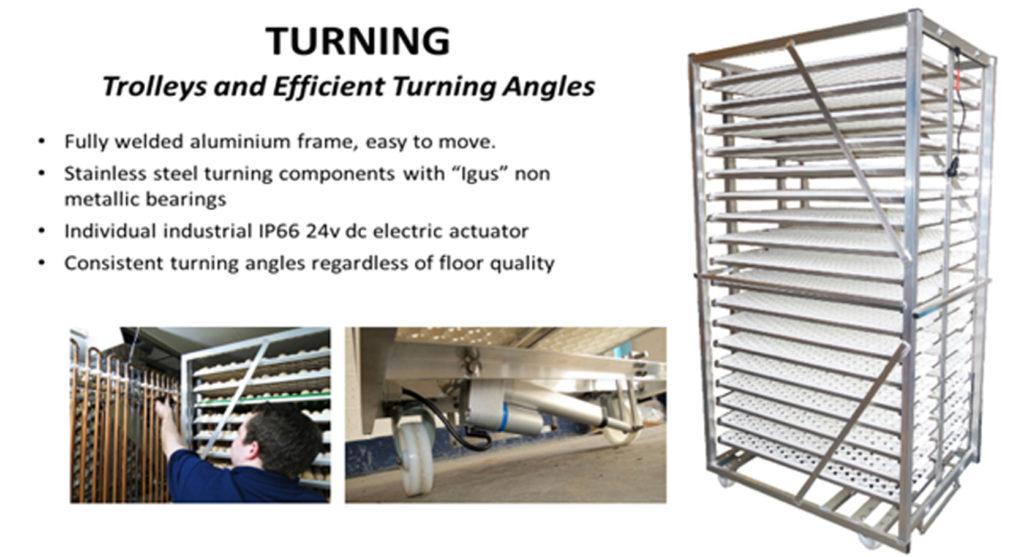 Turning of avian eggs during incubation affects various physiological and physical aspects of the embryo and extra-embryonic membranes, including the formation of sub embryonic fluid, utilization of albumen, and embryonic growth. While not turning eggs can cause abnormal development, such as reduced area vasculosa, reduced sub-embryonic fluid (SEF) and reduced chorioallantoic membrane (CAM) development, increase malposition and improper sticking of the allantois to the yolk membrane or the embryo to the shell membrane, all of which can lead to embryonic mortality. Cutchin et al; (2009) states that eggs turned less than 40° will reduce hatchability and chick quality, also will increase embryonic mortality and malposition.

Earlier, documents by Funk and Forward (1953) examined in two experiments the effect of turning angle on hatchability. The angles of turning eggs during incubation were, 20°, 30° and 45°, in the first experiment and 30°, 40°, 45°, a second experiment, they concluded that 43° to 45° had the best results of hatchability both hatch of all egg set and hatch of fertile eggs. In 1960 the authors repeated the same experiments with different angles. They investigated turning angles of 30°, 45°, 60°, and 75° from vertical and they found that 43° to 45° still produced the best results of hatchability traits. 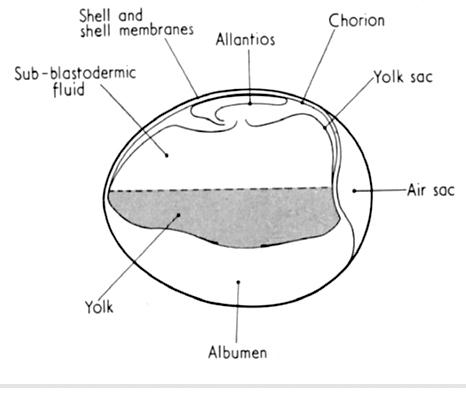 Figure 2: Distribution of some of the egg contents on the 6th day of incubation 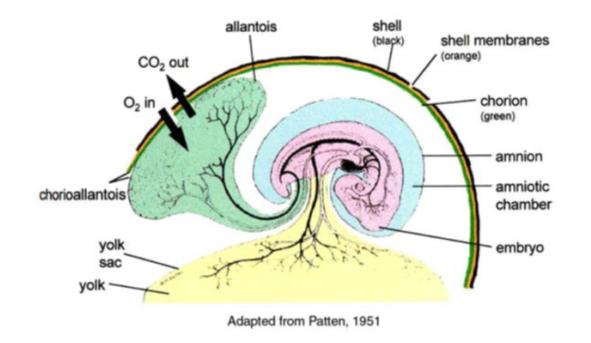 Recently, Elibol and Brake, (2006) confirmed that a turning angle of less than 45° might too often been countered in commercial incubators. A deviation could increase the incidence of malposition embryos in certain cases. Moreover; Cutchin et al, (2009) reported that the hatchability of fertile eggs was 91.41% at turning angel 43° to 45° while it was 50.91% at 15°, Moreover, late embryonic mortality was 25.16% compared to 2.5% at 15° and 43° respectively.

Boleli et al, (2016), explained in their review that, egg turning, egg position, and ventilation are associated effects of egg turning. Egg position, and ventilation influence several processes, these include: gas exchange and heat transfer between the eggs and the external environment, egg water loss, adhesion of the embryo to the extra-embryonic membrane structures (corium, amnion and allantois), and nutrient availability.

Egg turning allows the diffusion of gases inside the eggs and between the eggs and the external environment. It is critical, particularly during the first week of incubation, due to the long distance between the embryo and the shell, and to the high albumen density. During this period, the embryo depends on the diffusion of gases through the eggshell and the albumen to obtain O2 and eliminate CO2, because the embryo develops on the yolk surface and gases are exchanged directly by the embryonic cells.

After the emergence of the circulatory system (< 36 h of incubation) and the formation of the amniotic cavity and yolk vascularization, gases are exchanged through the vitelline vessels. The allantois begins to protrude out of the embryo body around days 3-4 of incubation, and continues to grow in size, surrounding the amniotic cavity, where the embryos develop. As both embryos and allantois grow, the allantois comes closer to the eggshell, reducing the distance travelled by the gases and allowing gas exchange via allantoic vessels by diffusion through the eggshell pores.

Gas exchange through the allantoic arteries and veins begins on days 11-12 of incubation. By days 13-14 of incubation, embryo metabolic heat production increases, and egg turning aids the circulation of air in the inner surface of the egg (external shell membrane) and air chamber, and allows heat loss by conduction, convection, and evaporation. However, egg turning is also important to prevent dehydration and incorrect embryo development (Wilson, 1991). Moreover, egg turning moves nutrients, facilitating their absorption. Egg turning frequency, axis of setting, angle, and plane of rotation influence in-Ovo development, which may affect hatchability and chick quality (Wilson, 1991).

Wilson (1990) observed that high egg-turning frequency (96 times/day or turning every 15 minutes) improves in-Ovo development and hatchability. However, turning every 15 minutes is operationally difficult and increases equipment maintenance costs, and therefore, it is not applied in commercial settings. In commercial hatcheries, broiler breeder eggs are turned 43° to 45° per hour until day 18 of incubation. 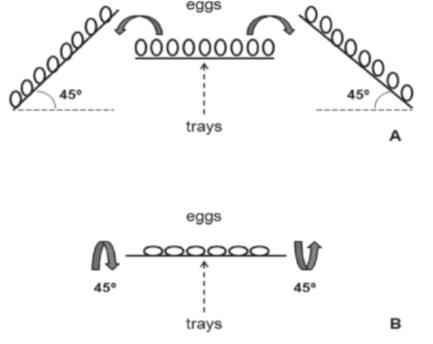 Figure 4: Egg turning in vertical (A) and horizontal (B) incubators (adapted from Alvarado Mora, (2008)

The effect of the egg turning rate on in-Ovo development is also related to the tilt angle of the eggs. According to French (1997), normal embryo development requires eggs to be rotated 90 degrees every hour. This is achieved by horizontally tilting the eggs (horizontal setters) or the trays (vertical setters) 43° to 45º angle from side to side (Figure 4). This is the angle that best fits the operational conditions of commercial setters, according Elibol and Braket (2006). Moreover, Tona et al. (2005), concluded that egg turning was required during incubation until day 12, at least, and should not be stopped until after day 15.

Eggs are submitted to circular movements because the chorioallantoic membrane may break, causing embryonic mortality (Brito, 2006). Chicks hatched from eggs that turned at 43° to 45˚ angle were heavier and presented lighter dry residual yolk (Cutchin et al., 2009).

All these associated major and minor factors, if observed, combine to play their part in ensuring the best hatchery operation and practice for the required optimal hatchability traits, and healthy chick quality. There are, of course, other factors that have a major impact through the process of embryo development such as: setter room temprature, room ventaltion, oxygen supply, cooling and the removal of  heat and CO² (recommended to be not more than 0.4%) and air pressures.

The challenge to incubator manafacturers is to provide the correct air volicity and air flow for every single egg in the setter at every position in the turning process. Some hatcheries claim that to increase ventilation efficiency you must reduce the turning angle to as little as 15-20° to allow more space inside an incubator for ventilation. Some have decreased the distance between the eggs racks and increased the turning frequancy to up to 96 times per day to compensate for the reduced turning angle. All of these trials have, to date, not yeilded improved hatchability and chick quality traits. On the contrary hatchability as chick quality has been seen to decrease and embryonic mortalities and embryos malpostions have subsequently increased.

Turning systems are often unique to each incubator manufacturer. The EmTech trolley orientation is based on a proven bi-directional paddle fan concept with only one trolley each side of the central paddle fan and in end-on orientation. In this configuration, trays do not turn against the airflow.  The six- bladed paddle fan has a unique tapered design which significantly improves the ‘air-off’ pressure and subsequently air velocities through the egg mass. This removes potential hot and cold spots and ensures that the environment within the setter cabinet will only fluctuate by a maximun of 0.6°C. The perfect 43° to 45° turning angle on every trolley also contributes to the stability. This is possible because of the individual turning actuators positioned on every trolley and also ensures that the correct turning angle can be achieved even when the setter floor is uneven.

Figure 5: EmTech’s trolley orientation ensures that even when the trolley is turned the air flow and velocity is not affected. The image on the right shows the the more usual turning systems used by many other incubator manufacturers

It is also recommended that a computer based trolley turn alarm is installed so that trning faults can be detected immediately without having to schedule time consuming physical check routines. This saves time and avoids having to open the incubator door twice a day to check for turning angle or other system faults which will unbalance the incubator environment and prolomg the hatch window.

We are very happy to recieve your comments and questions.

For more information and Techinical Support:

We are all ready to go! Please visit our stand at IPPE'22 – Stand #B4155.Meet the team … END_OF_DOCUMENT_TOKEN_TO_BE_REPLACED